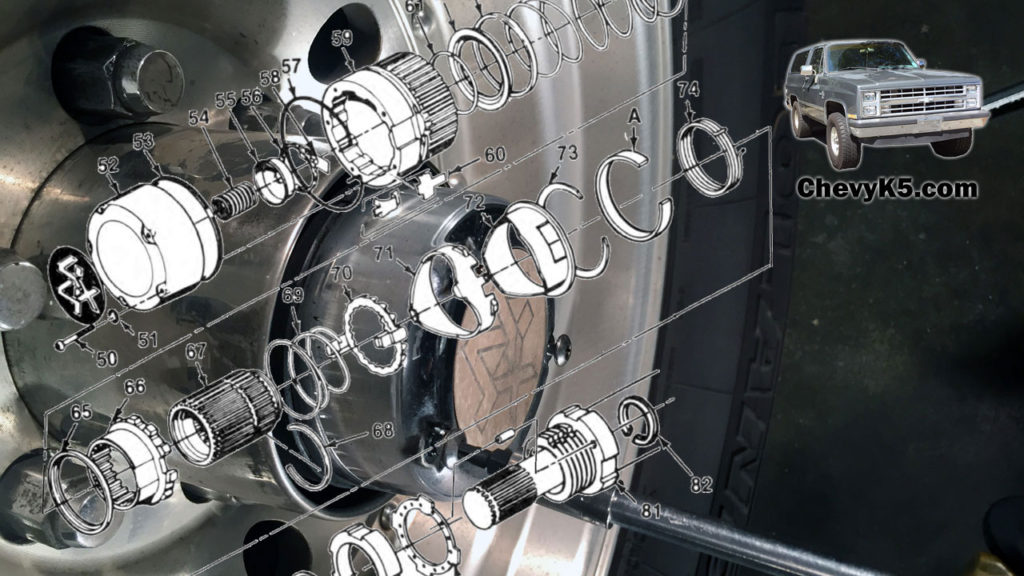 Do you have problems with your square body K5 Blazer or truck automatic locking, Autolocking Hubs?  A lot of people have issues with them sticking and not engaging.  Some people have trouble getting them to disengage.  I’ve had issues where one or the other of them would engage occasionally on their own.  When this happens it creates a situation where one of the front axles is turning the front differential and at highway speeds it creates a vibration like a wheel out of balance.

I’ve followed incorrect advice on cleaning and lubricating the automatic locking hubs in the past and continued to have problems with them.  This time I did a considerable amount of research (I read the service manual and and found another document on servicing these autolocking hubs) on the right way to clean and lubricate K5 Blazer autolocking hubs.  These hubs were used on some Ford Broncos as well, and the 2nd PDF mentions that as well.

The instructions mention using a special grease (GM 1052750, Darmex Lubricant 123LT) on the “Brake Band” which is a coil spring which wraps around the “Drag Sleeve” (#75 in service manual PDF).  Nowhere had I read this before.  All the other instructions and posts I’d read said to clean the entire automatic locking hub assembly in parts cleaner and then lubricate with a light oil.  I found the MSDS sheet for this grease and emailed it to Royal Purple and confirmed that I could use their Ultra Performance Grease instead.  I did purchase a tube of the GM 1052750 Darmex 123LT lubricant off of eBay but it’s pretty old and I didn’t want to use it.

The proper way to service the autolocking hubs:

I wanted to find a part # for the little o-rings on the hub cover torx screws, but I didn’t.

I made a video of the process:

Here are the related documents:

I can report that I’ve been driving the vehicle for a couple of weeks now after performing this “correct” method of cleaning and lubricating the autolocking hubs and they have worked great.

Best Passive Crypto Income Site...
Click link above to read MY BLOG POST on why I use these guys. I use this and these guys are legit!

One of America's Best Kept Secrets! My Family Does This and it Works!
Health, Wellness, Freedom!

Join the AMSOIL Preferred Customer Program and Save 25%!

I don't load this site up with annoying ads, if you've found something of value here, help keep this site going! Note: Both options below will show my recipient name as PhaseQuest.
Tip/Donate via Paypal